Can a simple plastic film wrap really make a difference?

Yes it can! Unlike the usual wrap, films, labels and laminates made from oil-based materials, Ingeo films are made from plants. By using plants,
making Ingeo films uses 50% less non-renewable energy & results in 75% less greenhouse gases than traditional plastics.
Our films provide performance with a conscience. By choosing this ingenious new film for everything from a sandwich wrap to a label,
you can help change the world one even if it’s just one tasty snack bag at a time.

Choosing a bottle to make a difference

This isn’t just about another plastic bottle. Unlike regular bottles made from finite petroleum resources, bottles made from Ingeo plastic are a step in the right direction.
Because Ingeo is made from plants, not oil, making these containers produces 75% less greenhouse gases & uses 50% less non-renewable energy than traditional plastics like PET & PS
Ingeo plastic is a material with a conscience.  Choosing a new bottle, without sacrificing performance, is one small way you can make an eco-friendly difference even if it’s just one bottle at a time. 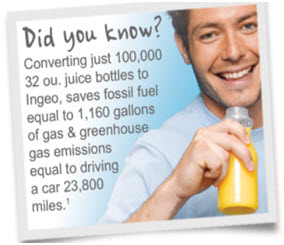 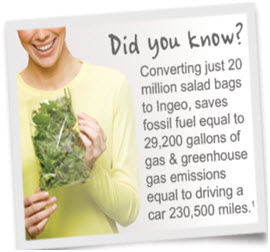